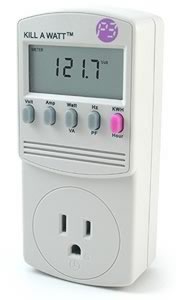 In June I shared some tips for reducing home energy costs. Most of the information came from Michael Bluejay's excellent guide to saving electricity. I was curious how much electricity invidual appliances use, so I ordered a gadget that Bluejay recommends: the Kill-a-Watt electricity meter. The official web site declares:

Connect your appliances into the Kill A Watt™, and assess how efficient they are. A large LCD display counts consumption by the Kilowatt-hour just like utility companies. You can figure out your electrical expenses by the hour, day, week, month, even an entire year. Monitor the quality of your power by displaying Voltage, Line Frequency, and Power Factor.

I've gone through our house and measured the power consumption of random devices:

While researching this post, I learned that cable boxes are hidden power hogs. It hadn't occurred to me to test ours, but I'll do so tonight. (I read one report of a cable box drawing 100 watts. If you leave yours on 24/7 as we do, that's about $100 a year!)

The Kill-a-Watt's best feature is the ability to measure power consumption over time. If I want to see how much power the cable box really draws, for example, I can leave it plugged into the Kill-a-Watt. After a few days, I can check the cumulative power consumption in kilowatt hours and compare it to the amount of time that has elapsed. (Both of these are measured by the device.) Simple arithmetic will show me how much I'm spending to power the cable box!

The Kill-a-Watt does have some minor drawbacks:

I find the Kill-a-Watt fascinating. It makes an abstract topic concrete. I can read all sorts of tips about how to save energy, but they're all rather esoteric until I can actually see the numbers in front of me. The Kill-a-Watt gives me those numbers.

Note: I purchased this device using Amazon credit earned from this site. I also purchased several personal finance and self-development books for future review. I hope to begin “re-investing” some of the site revenue in items to review and to give away to readers.

How much does it cost to start a side gig?

The four pillars of investing

How to get rich and stay rich

The billionaire next door: The wisdom of Warren Buffett

As featured in:
70 shares