There's this idea in our society that if you want something amazing, there's got to be some secret to getting it.

People want “magic bullet” answers. They think if they look long enough and hard enough then maybe, just maybe, they'll stumble upon the SECRETS “THEY” DON'T WANT YOU TO KNOW. 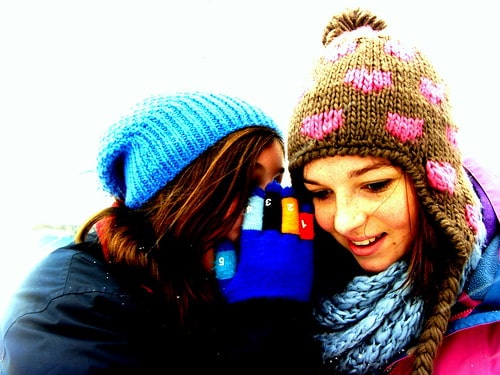 I'm not judging. I used to be like this too. But now I know different. Now I know there aren't any secrets. The truth is often hidden in plain sight; you just have to learn to see it.

I've found that the best way to learn the “secret” of whatever it is I want to achieve is to listen to people who have done it (or are doing it) first.

When I wanted to become a writer, I read advice from my favorite authors. When I wanted to get fit, I read interviews with elite athletes. While digging out of debt, I talked to others who'd done it before me.

Two years ago, I read The Snowball, a fantastic biography of billionaire Warren Buffett. There's a lot to learn from the world's third-richest man. I believe that soaking up his wisdom — his “secrets” — helps me become a better investor and a wiser steward of my wealth. It also helps me become a better teacher of personal finance. (It was through reading this Buffett bio that I came up with the concept of the wealth snowball.)

Buffett's advice probably won't help me become a bonafide billionaire but a guy can dream, right?

How to Reach Financial Freedom

Taking advice from billionaires is great, but in some ways it's also impractical. That's why I also do my best to learn lessons from successful people in my day-to-day world. If I want to uncover the “secret” to a rich life, the best approach is to see what works (and what doesn't) for average people.

Here's an example. A while back, Jeff from the Sustainable Life Blog asked 39 colleagues two questions:

Jeff compiled the responses into a colossal collection of stories and tips about how to achieve financial freedom. If you're at all interested in this subject, you should bookmark his post: Who else wants to retire early and be free? (Unfortunately, the original article has been “unpublished”. I've linked to the archived version from the Wayback Machine.)

Here, for example, is how my buddy Jeremy answered the questions.

Because I'm a nerd, I spent an hour reading everybody's answers. And I took notes. And I crunched the numbers. Here are the most common responses:

In other words, when you ask a pool of people who write about Financial Independence what the secret to success is, about half say “spend much less than you earn” and about half say you should be willing to leave the herd to follow your own path.

The Secret to a Rich Life

Put these two ideas together and you have a powerful recipe for a rich life. The secret to a rich life? Save half of your income so that you can pursue your purpose.

There's a real temptation to believe that financial success is more complicated than that…but it's not. That's what others have concluded, and that's what I've come to understand after twelve years of reading and writing about money full time. The “secret” to financial success real is this simple. (But, as always, simple and easy aren't the same thing.)

My entire mission here at Get Rich Slowly is to help my readers do thes two things. That's why I'm so insistent that folks write a personal mission statement. And that's why I stress that the most important thing you can do to achieve your financial goals is to boost your saving rate.

To my mind, these two steps are the keys to financial freedom. They're the secret to a rich life.

Very well said. When you get right down to it, the more you save, the sooner you can retire. Increase your income, cut expenses, or (ideally) do both.

We wrote our personal FI mission statement last year and it has been an excellent tool as we focus on our goals and work to align our actions towards those goals. It is much easier to drive past the store or put back the extra item from your shopping cart when you have a clear focus and reasons to save!

Nailed it, from a money perspective at least.

I think a rich life is about a lot more than just money, though. Having rich and rewarding personal relationships, feeling connected with the work you’re doing, feeling fulfilled, etc…

Money can definitely help those things in a lot of ways, though, and having a high savings rate and the ability to forge your own path is a great way to living a rich life in many ways.

My response was to start investing as early as you can. It’s been a few years and I’m leaning toward growing your saving rate now. You need to save more so you can invest more. Both are important.

Personal mission statement is a good one too. You have to be willing to take less traveled path. Financial independence is not the norm.

I always felt a little strange living in a simple small house when I was making as much money or more than people living in mansions. But then again, they are still working and I’m doing whatever I want today, everyday, all day long! This community wasn’t a thing back then, I wish it was. I feel like an idiot now for ever feeling inferior because we were frugal, I would have felt like a champ knowing what I know now!

I have been watching psychology lectures recently on YouTube, and one lecture about sacrifice had a line I thought was obvious and simple, yet profound. He said “Whenever I have set a goal and sacrificed for it, I have always been better for it. Even if I didn’t achieve the goal.” So many people either set goals they aren’t willing to sacrifice for (this gentleman would say then it’s not really a goal) or say there is too much required to even start. Yet if you just stand up and face the challenge it’s amazing how you can be better… Read more »

I (like many) followed the mantra that that I had a good job(which I hated), and that I had a good life(no one cares about CC debt right?), and that I “deserved” to buy whatever it was that I wanted at that moment because I worked hard. Then the bubble burst and in 2007 my whole world view got destroyed. I made a promise to myself while sitting in a grocery story, trying to figure out the cheapest way to not starve for the week, that I would become financially independent, and that if I ever lost my job again… Read more »

Keep these posts coming with sensible life hacks and solutions!

My mission statement changes all the time. Right now I plan to participate in environmental activism when I retire early.

“Because I’m a nerd, I spent an hour reading everybody’s answers. And I took notes. And I crunched the numbers.”

Love it! Way to #MathShitUp J.D!

And yes, I agree, all of personal finance can be boiled down to “spend less than you earn”. It’s simple but not easy.

Btw, as a FI nerd, how do you feel about an FI board game? If you were to design one, what features would you include? (Asking because we played Robert K’s Cashflow board game recently and it got us thinking…)

I tend to follow your method in reading as much as I can on a topic from subject matter experts to become better at that topic.

While I might not invest enough time and effort to become a subject matter expert, I ought to be able to get to a high degree of understanding with sufficient effort and consistency.

I am going to apply this now to reading, writing and blogging.

“The secret to time management? Learn to say “no” and tackle your most important tasks first.”

Waitaminnit…didn’t you also say, “I made a resolution. I decided that instead of saying “no” to things because I was afraid of them, I would “just say yes”. That became my working motto: “Just say yes”. Any time anyone asked me to do something, I agreed to do it (as long as it wasn’t illegal and didn’t violate my own personal code of conduct).”

Oh yeah, you did say that, here: https://www.getrichslowly.org/the-power-of-yes-a-simple-way-to-get-more-out-of-life/

Haha. Yep. I say both. And while seemingly contradictory, they’re not. In longer pieces — and especially in spoken presentations — I talk about how it’s important to say “yes” in order to overcome fear and in order to cast a wide net that allows you to experience many things. But that when you’re managing time and deciding what to focus on, then you need to learn to say “no”.

But that’s my whole point. It’s not really practical to reduce personal finance to a series of bullet points because the bullet points will contradict each other, depending on the circumstances. Einstein said that everything should be as simple as possible, but no simpler. I think that most blogs overdo the simplification aspect of PF in order to make it palatable to their intended audience, and that can be dangerous to the uniformed reader.

My answers to those two questions are as follows (1) I got on the path to financial independence because I wanted to buy a new car. I was tired of my old car, it was having issues and I was looking to buy a new car when I stumbled across Dave Ramsey’s thoughts on cars. Shortly thereafter, after my husband and I got married, we started a modified version of Ramsey’s baby steps and has paid off $55,000 in unsecured debt in 13 months. 10 years later, we’ve paid off our house and are debt free (not counting two investment… Read more »