The Never-Ending War Against Advertising

I spoke with a reporter the other day. She was looking for ways to fight the urge to shop. “My top tip is to avoid advertising,” I told her.

“That sounds nice,” she said, “but how do you actually do that?” I talked about how I used to read comic book blogs and participate in comic book forums, and how doing these things led me to increase my spending on comics. When I stopped visiting such sites, my spending dropped.

“Television is especially bad,” I told her. “I don't watch much TV, but I did watch the Olympics. I hadn't watched anything on TV since the Oscars last winter. I'd forgotten about all the advertising. It was mind-blowing. There's no way a person could watch television day after day without having the commercials affect them.“

The reporter and I tried to brainstorm other ways to avoid advertising. In the end, though, I had to agree that marketing is so pervasive in modern life that we cannot hope to escape it. The best we can do is minimize its impact.

Advertising in real life
Since that conversation, I've tried to pay attention to the presence of advertising in my own life. 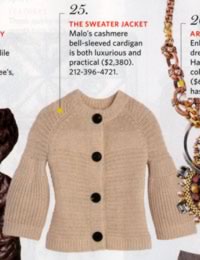 Kris and I visited some friends the other night. They had been mailed a “complimentary” issue of Town and Country magazine. I leafed through it while we chatted. “This entire thing is ads,” I said. “Ads for expensive Stuff. Even the articles are ads.”

(This reminds me of a true story, the details of which I'm about to mangle. My friend's wife came home one day with a $700 purse. He was mortified, and insisted his wife return it. She did, but she came home with a $200 replacement purse. “I saved $500!” she said.)

Earlier this week, I picked up the latest issue of Esquire. This magazine, too, was mostly ads: ads for expensive watches, expensive cards, expensive clothes, expensive cologne. I'm not exactly a fashion maven, but even after a minute browsing the pages, I found myself coveting $2000 sweaters. Literally:

Resisting the urge
Maybe that's why I almost bought a bunch of clothes today.

This morning, I received a piece of e-mail from Filson. I'm on their mailing list because I love their clothing. I don't have many Filson items — they're expensive! — but what I have, I worship. I've always wanted a Filson shirt. Well, today's e-mail featured a sale on “tin cloth” shirts. Perfect!

I clicked through to the Filson web site, picked a size and color, and added a shirt to my basket. Then I browsed the web specials. I chose a sweater, a pair of pants, and a hat, and added them to to my shopping cart. But as I walked downstairs to get my credit card, I came to my senses: I was about to spend over $200 because of an ad. Isn't this exactly the sort of thing I preach against? If I hadn't seen that ad, I would have spent $0, and been just as happy. I walked back upstairs, sat at the computer, and closed the browser window.

I'm not opposed to buying a $75 shirt — if it's quality and will last a long time — but I want it to be a conscious decision. I want to buy the shirt because I need it, not just because I saw an ad for it.

Take back your brain!
This all reminds me of yesterday's guest post about attentive spending. The power of marketing is a very real thing, and we, as consumers, must remain vigilant against its influence. Awareness leads to informed decisions. Two simple things you can do:

If you really want to get fancy, check out the marvelous Take Back Your Brain, a site devoted to using professional marketing techniques to advertise to yourself. Take Back Your Brain is all about creating anti-ads, or ads for things you want to be and do. It's brilliant.

Drama in Real Life: When Emergencies Pile Up

Learning to Give: What *I* Can Do to Fight Poverty

What if you didn’t start saving early? Advice for late bloomers