The power of positive cash flow

When I lived paycheck-to-paycheck, there never seemed to be enough money to go around. I was perpetually $50 or $100 short of what I needed. Because I was spending more than I earned, I fell further behind every month. I had a negative cash flow, which led to more debt, which put me deeper in the hole.

It is mathematically impossible to get ahead with a negative cash flow — in order to save money, in order to pay off debt, you must earn more than you spend. Though I understood this intellectually, it was only when I actually saw the concept applied to my own life that I appreciated the power of positive cash flow.

To gain wealth, you must spend less than you earn. This is the fundamental law of money. Framed in terms of a mathematical equation:

This formula tells us two things:

The greater the gap between earning and spending, the faster you lose (or accumulate) wealth. There are only two things you can do to increase your cash flow: spend less or earn more. (Or both!) This seems obvious, I know, but smart personal finance really is this simple. Everything else — paying yourself first, investing ten percent of what you make, building an emergency fund — is done in support of this fundamental law.

How to Improve Your Cash Flow

Most people can improve their cash flow right now with minimal effort simply by spending less. If you're looking to make a change, practice frugality: buy used instead of new, make the things you own last longer, recycle worn-out goods for other uses. Look for cheaper options on the things you buy and do every day. 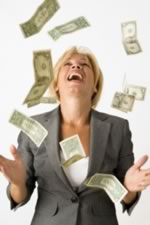 It's useful to change your mindset to focus on needs, not wants. Many of the things that we've come to view as necessities are actually luxuries. You don't need 180 cable channels or a Netflix subscription. You don't need a cell phone. People lived without these things for centuries — it's still possible to live without them.

Recurring expenses can be especially insidious. Long-term contracts and installment plans often contribute heavily to negative cash flow. If you truly need to make a major purchase, save the money to pay in full. Don't buy things you cannot afford.

If you can't (or won't) decrease your spending, then you'll need to find ways to increase your earning. If your current job doesn't pay well, try to find another. If you like your employer, you might work to earn a promotion or ask for a raise. Also look for ways to make money from your hobbies. Finally, don't forget that you can sell things you no longer want or need.

Related >> Use Your Hobbies to Bring You Wealth

Two other skills can play crucial roles in managing your cash flow. First, you should learn to track every penny you spend. If you don't know how much you're bringing in or where it's going, you cannot know where changes need to be made. Also, many people consider a budget an important planning tool. With a budget, you can be certain that your money is being put to the best use.

As your income grows and your spending shrinks, your cash flow will increase. At first you might have just a little extra cash each month. Using the principles of the debt snowflake and the debt snowball, you can use this money to pay off your credit cards, your car loan, and other consumer debt. You might make minimum payments at first, but eventually you'll be able to pay an extra $25 per month, then maybe an extra $100, or even $250. As your cash flow increases, you may be amazed to discover how quickly you can pay off your debt!

Running the numbers, Joe realizes it'll take him decades to pay off the credit card. He decides to increase his cash flow by taking a part-time job at the local comic book store, where he earns an extra $250 per month. At the same time, he cancels his cell phone, begins cooking more meals at home, and switches to store-brand groceries. This saves him $250 per month.

Once Joe has eliminated his credit card debt, he will have freed up an additional $100/month, raising his cash flow to $600. (If he's smart, he'll begin saving and investing this money.)

The Power of Positive Cash Flow

When I started my financial turnaround in the fall of 2004, I had $35,000 in debt. It took me just over three years to eliminate this. Simple math reveals that I obtained an average positive cash flow of $1,000 per month.

This didn't happen all at once, though. I started at zero, just like everyone else. In fact, early in 2004, I still had a negative cash flow. By October, I was bringing in about $50 more than I was spending. I was making minimum payments on my debt, but looking for ways to increase my income and decrease my spending:

Alone, each choice contributed only a little to my bottom line, but taken together, they made a huge difference. And once I saw the power of positive cash flow, it gave me confidence to continue, even when there were other things I'd rather do with the money. (In the past, having a few hundred dollars extra per month would have been license for me to buy a new car or to find an expensive hobby.)

Now that my debt has been eliminated, I've directed this positive cash flow to saving and investing. As exciting as it was to repay debt, it's even more thrilling for me to build wealth. I'm able to do this quickly with a positive cash flow of over $1,000 per month. And I accomplished all this by using the principles I write about daily at Get Rich Slowly.

How to Cut the Cable Cord in 5 Easy Steps

Calculate how much your debt costs you per month

10 amazing waterfront rentals for under $1,000 per week