Spend less than you earn

This is the third of a fourteen-part series that explores the core tenets of Get Rich Slowly.

When people ask me for my top tip on personal finance, they're often disappointed. My top tip isn't sexy. “To get out of debt and to build wealth,” I say, “you must spend less than you earn.” People are hoping for something more — some sort of mystical secret. But you know what? As mundane as it sounds, that is the mystical secret of money.

If you want to get out of debt and build wealth, all you ever need to do is spend less than you earn. Everything else we talk about at Get Rich Slowly is window dressing, a prop in support of the fundamental equation of personal finance:

The wider the gap between what you earn and what you spend, the more financial success you'll achieve. 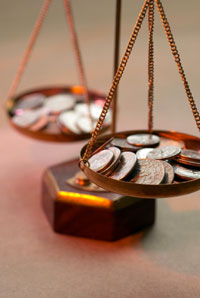 This simple formula has a couple of implications. The first is that frugality can have a very real impact on your financial situation. Frugality is an important part of personal finance. When you decrease your expenses, your cash flow increases. If you're living paycheck-to-paycheck on $3000 a month, reducing your monthly expenses by $300 can give you substantial breathing room. (See the Charles Dickens quote at the start of this article.)

The big advantage of thrift is that you can implement it immediately. In theory — if there were no psychological factors — you could cut your expenses in half today and your savings would sky-rocket. Thrift pays immediate dividends.

The disadvantage of frugality is that there's a limit to what you can do. You can only trim so much from your budget before you become miserable. Or until you don't have enough for food and shelter. If you earn $3000 a month, you only have $3000 total you can cut. At $3000 monthly income, your maximum positive cash flow is $3000.

Thrift has limits. You cannot spend less than zero. On the other hand, there is theoretically no limit to how much money you can earn. Frugality is important, but if you want to make real progress, increase your income.

In the 3-1/2 years I've been running this site, I feel like I've never been able to make this point emphatically enough. The people I know who have met with wild financial success have all done so by increasing their income in some way. They've all had to make sacrifices to do this, but once they've met their goals, they're able to scale back to a normal way of life. If you want to destroy your debt — not just defeat it, but destroy it — do something to boost your income. How do you earn more money?

All of these work, but they all require sacrifices — especially the sacrifice of time. Most people feel that these options aren't right for them. If that's the case — if you've already cut your spending to the bone and you're unable to earn more — then there's really no answer other than extreme frugality and patience.

There are No Silver Bullets.

There's no magical way to change the fundamental equation of personal finance: To build wealth, you must spend less than you earn. If a person has already cut her spending to the bone and is unable to increase her income, she will continue to struggle.

This is the third of a fourteen-part series that explores my financial philosophy. These are the core tenets of Get Rich Slowly. Other parts include:

Which financial apps, products, and services should we review?

Books about money that might make appropriate Christmas gifts

How to get what you deserve when filing an insurance claim

Action not words: The difference between talkers and doers

Yes! Sign up and get your free gift
50 Comments
Oldest
Newest Most Voted
Inline Feedbacks
View all comments