This is the first of a fourteen-part series that explores the core tenets of Get Rich Slowly. 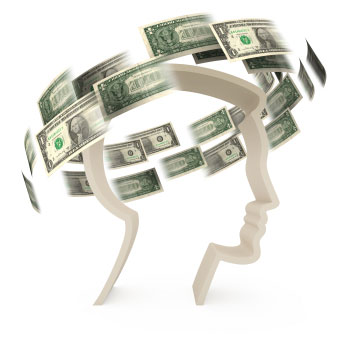 I had a group of old high-school friends over to the house last weekend. As the daylight faded and the cool of the evening settled, we sat around a blazing fire talking about life. We shared the good things we've done over the past twenty years — and we shared the bad. Inevitably, the conversation turned to money.

Each of us had a story about how we'd done dumb things with money. In every instance, these dumb things were the product of some psychological or emotional impulse. We weren't acting rationally. We're smart folks — when we were in high school together, we were in the college-prep classes together — and we understand the mathematics of our choices, but we make them anyhow. Why?

Because smart money management is more about mind than it is about math.

The Psychology of Money

For years, the “expert” advice on personal finance has assumed that we act like machines, that we will always choose the mathematically optimal option. I've read countless personal finance books filled with advice that is technically correct, but which forgets the role our minds play in making financial decisions.

When discussing this notion — that financial success is more often influenced by personal psychology than by mathematical ability — I frequently cite Dave Ramsey's debt snowball. It's the perfect example of what I mean.

Critics of Ramsey are quick to point out that the math of his method doesn't make sense. Going strictly by the numbers, it's better to pay down debt by starting with the obligation that has the highest interest rate. The critics are right, of course, but they miss the point. In most cases, if we were being rational, we wouldn't have accumulated the debt in the first place. Most of the time, debt isn't a math problem — it's a psychological problem. Because of that, Ramsey's method — pay off the lowest balances first — makes more sense. It allows quick wins, which provide positive reinforcement, which provides a motivation to continue.

Here are some of the many other ways in which our minds play a role in money management:

There's a burgeoning body of research that explores the many ways in which money management is more mental than mathematical. “Behavioral finance” and “behavioral economics” are explored in books like Why Smart People Make Big Money Mistakes — and How to Correct Them [my review], Why Smart People Do Stupid Things With Money, Predictably Irrational, Nudge, and Your Money and Your Brain.

Take Back Your Brain

We can never completely remove the emotional and psychological aspects of money management. Nor do I think we ought to. We're humans, not robots. But I do think it's important for us to reduce the negative emotional financial decisions as much as possible. Here are some of the best ways that I have learned to combat poor choices — to take back my brain:

I'm not sure what will happen with the friends I saw last weekend. Maybe some of them will continue to make the same financial mistakes. Maybe some of them will turn things around. But I do know this: The answers to their problems will not come from a better understanding of compound interest or another explanation that it's important to spend less than you earn. While these concepts are important, they're purely mathematical. In order for my friends to manage their money, they need to go beyond math — they need to master their minds.

This is the first of a fourteen-part series that explores my financial philosophy. Other parts include:

These are the core tenets of Get Rich Slowly. I intend to publish a new installment in this series every Monday.

There are 90 reader responses to "Money is more about mind than it is about Math".