This article is the fifth of a fourteen-part series that explores the core tenets of Get Rich Slowly.

Getting started with smart personal finance isn't always easy. It's one thing to read about the steps you should take, but it's another thing to actually do them. Your debt is so overwhelming or your saving goals so lofty that you begin to believe that the only way you'll ever get where you want to be is by winning the lottery.

Part of the problem is that we live in a society that idolizes the Big Winner. Nobody celebrates the guy next door who bikes to work, grows his own food and cooks his own meals, shops at the thrift store, and gets all his books from the library. That sort of life isn't glitzy. Yet it's that sort of life that can (and does) lead to true wealth. 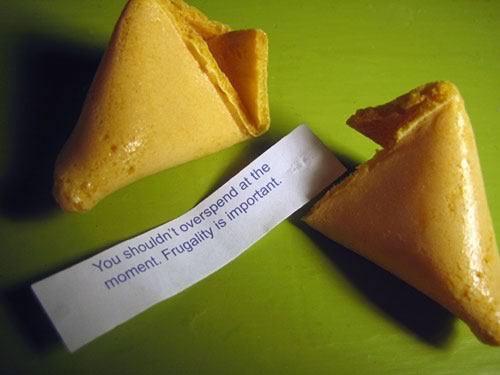 This image was submitted by GRS reader Karen L.

I can't remember the first thing I did when I decided I was tired of being buried in debt. But I do know one thing: It was something small. When I became concerned about my finances, it was months before I had any big decisions to make. But there were tons of small things I could do right away.

It's true that it's important to save money on the big stuff, like a home or a car. Any time you make a large purchase, your opportunity to save is magnified. But large transactions are rare. How often do you spend more than $100 on anything?

You have more opportunities to save when shopping for groceries. You can clip coupons or buy in bulk or shop for store brands or compare unit pricing. And you can do it today. Saving fifty cents a week on milk might be inconsequential as a one-time occurrence, but over the course of a year, it amounts to $26. Taken together, many such small economies make a real difference. Small amounts matter.

Maybe you save fifty cents a week on milk by using a cheaper brand, save $4 a week by clipping coupons, save $2 a week by taking the bus to work on Fridays, save $25 a month by dropping to basic cable, save $47/year by canceling your subscription to The New Yorker, and save $100 during the summer months by growing your own vegetables. These are small changes, but these choices alone would save you over $750 a year.

Starting small has an interesting side effect. As you get in the habit of cutting costs on one thing, you find that you can transfer that skill to other parts of your life. One small step leads to another.

Some folks frown on frugality. They equate it with being “cheap” and consider it beneath their dignity. Others are unwilling to make sacrifices today when the future is so uncertain. They're not willing to “live like that” when they could get hit by a bus tomorrow. I think this is crazy for a couple of reason:

First, spending is not the same as happiness. Second, most of us are likely to live a long time. Which would you rather do?

Recently, I had a chat with an acquaintance who runs an adult foster home. She told me anecdotes about her elderly residents who've run out of money. Their quality of life is not high. If you think it's a burden now to give up your cell phone or to take the bus, try having to pinch pennies on necessities when you're 70. Or 80. Or 90.

Remember: Don't confuse frugality with depriving yourself. If pinching pennies makes you feel lousy, then loosen up. Spend a little more. I am not advocating “retail therapy” or spending above your means — I'm telling you that it's okay to spend more for your favorite brand of yogurt or to get your favorite cut of beef. If you don't like shopping in thrift stores, don't.

There's real value in boosting your income — I don't deny that. But frugality is an important part of personal finance, too. And for each of us it's different. I might be able to cut back on clothing and transportation, but I'll probably always spend a lot on food. On the other hand, food may be a perfect place for you to cut costs, but you're not willing to compromise on your wardrobe.

Frugality doesn't mean living like a pauper. Frugality is a good thing. Thrift is a responsible choice. When we restrict our spending on the unimportant, we're able to indulge ourselves on the things that matter most in our lives.

This is the fifth of a fourteen-part series that explores my financial philosophy. These are the core tenets of Get Rich Slowly. Other parts include:

What is the last day to ship before Christmas?

How to Walk for Fun and Profit

How couples can manage money together

8 questions to ask BEFORE hiring a financial planner

Yes! Sign up and get your free gift
70 Comments
Oldest
Newest Most Voted
Inline Feedbacks
View all comments