This article is the 10th of a 14-part series that explores the core tenets of Get Rich Slowly.

Yesterday, for the first time in my 40-1/2 years on this earth, I went ice skating. Initially, I was scared to try, but I eventually gave in to the taunts from my eight- and ten-year-old friends.

My first half hour on the ice was an exercise in frustration. I couldn't make it more than a few feet without falling or lunging for the wall. Worst of all, I had to swallow my pride and accept advice from Tristan, Emma, and Harrison, my grade-school guides. (Emma, especially, was keen to skate around with me saying, “You're doing great, J.D.! Good, good.”) 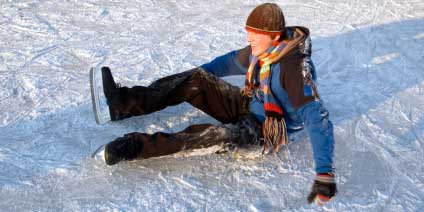 This isn't me, but I'm very familiar with that pose…

By the end of afternoon, I could make it around the rink on my own. My steps were shaky and uncertain, but ultimately my personal best was 2-1/2 laps before falling or grabbing the wall. I'll never be an Elvis Stojko (nor even a Tonya Harding), but now I can say I've been ice skating. I could have let my early failures and frustrations get me down. I could have left the ice and said, “I'm not doing this anymore.” Instead, I stuck with it. I'm glad I did.

The ability to keep going in the face of failure is critical to success when learning to skate — and when learning to manage your money. Nobody's perfect. We all make mistakes with money every day. I've made tons in the past, and I continue to make them. Here are just a few examples:

I could name dozens of other examples big and small. But the key is every time I realize I've made a financial mistake, I try to learn from it so I don't repeat it in the future. Sometimes I do repeat my mistakes, but I try not to. Instead, I try to fail forward.

Building success from the ashes of failure
In Failing Forward, John C. Maxwell writes that there are seven key abilities that allow successful people to overcome failure instead of taking each setback personally. Successful people:

These seven points form a firm foundation for dealing with failure in all parts of life, including personal finance. As you pay off your debt, as you learn to invest, as you cut your spending, accept that some failure is inevitable. But you are not your mistakes. Own them, learn from them, and move on. (And remember: Good habits keep small mistakes manageable.)

It's never too late to change direction, to start making smart choices. If you're 40 and don't have retirement savings, you can start saving tomorrow. If you're 30 and staggering under the weight of credit card debt, you can cut up your cards and make a commitment to change direction. The wonder of the future is that it can be built upon the ashes of the past.

At 40, I can look at who I am and can connect the dots back through my life. Though I regret not saving for retirement when I was younger, though I regret accumulating massive credit card debt, though I regret living a consumerist lifestyle, I see now that these experiences made me the man I am today. Without them, I wouldn't be motivated to help others make smart money decisions. (And let's be clear: I am not advocating that others repeat the mistakes I've made.)

Failure is okay
Every day I write this blog, I'm afraid I'll fail. (At my personal site, I recently said I've experienced “1000 days of doubt” at Get Rich Slowly.) Whenever I do my weekly podcast, I'm afraid I'll fail. And as I've written my book over the past nine weeks, I've been afraid of failure every single day. But I do these things anyhow. I know that if I don't try the things I'm scared of — if I don't risk failure — I'll never succeed.

I wrote about my fear of failure back in June of 2007. I described how I'd spent much of my adult life shackled by fear. But by saying “yes” to the things I'm afraid of, my life has become amazing.

If you've made poor financial choices, don't let them get you down. Don't let them make you afraid to try again. Draw from your experience. Fall down seven times, get up eight.

Related reading: How to build confidence and destroy fear.

This is the 10th of a 14-part series that explores my financial philosophy. These are the core tenets of Get Rich Slowly. Other parts include:

Preparing for the inevitable

Is $10 million enough to never worry about money again?

How to build credit the quick and easy way