Slow and steady wins the race

This article is the eighth of a fourteen-part series that explores the core tenets of Get Rich Slowly. 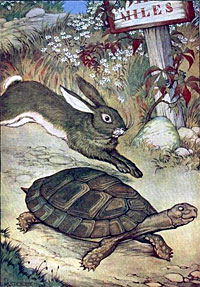 One reason I got into financial trouble during my early twenties was that I wanted everything right now. I looked at what my parents had, and it didn't occur to me that they'd been working their entire lives to get to that point. I wanted the same level of comfort, and I wanted it today. I wanted what I saw in the magazines and on TV. I wanted to start at the end, not the beginning.

In order to afford that sort of lifestyle, I went into a lot of debt. But even then, I couldn't manage for long. I lived high on the hog for a couple of years, and then found myself back in the Real World — but with lots of extra bills to pay. In an attempt to reach the “finish line” of life sooner, I'd put myself further behind.

It wasn't until a decade later that I finally understood that patience and perseverance are crucial to success — with money and everything else.

There are those who get rich quickly. People do win lotteries. They do sign sports contracts or get “discovered” by Hollywood or sell their small businesses to big conglomerates. And some are able to profit from risk and luck, picking the right stock at the right time, so that their $10,000 investment grows into a million. These things happen. But these lucky few represent a tiny fraction of all those who achieve financial success.

More typical is the story of my neighbor, a real millionaire next door. He worked hard for thirty years or more, practiced frugality, and invested wisely. He wasn't rich when he was young, but he enjoyed life while doing all of the “right” things. He was patient, and eventually this patience paid off. Now he's able to do what he wants without worrying about money.

But you can accomplish big things if you break them into small pieces. Last month, I walked a marathon. If I'd focused on how long 26.2 miles actually was, or how many steps I'd have to take (over 50,000!), or the blisters I'd get on my feet, I never would have started. Instead, I set a target pace, and I tried to meet that pace every single mile.

The same applies to personal finance. For example:

Instead of expecting to accomplish everything at once, recognize that meaningful change takes time. Be patient. Work hard. If your experience is like mine (and that of many GRS readers), you'll find that after a few months (or years), you're not only making progress, but you're making more progress than you believed possible. Your slow and steady movements have become large, graceful strides.

Here's a confession: I'm a Biggest Loser junkie. Every season, the program follows a group of contestants as they attempt to lose weight by reversing a lifetime of bad choices. It's the only reality show I've ever watched, and I love it.

In one episode last spring, contestants were challenged to pull NASCAR vehicles around a race track. The muscular men sprinted to an early lead. Meanwhile, former model Tara Costa — who had demonstrated patience, perseverance, and drive every week — put her head down and pulled at a moderate pace. The men tired. They began to flag, but Tara's pace never faltered. One-by-one, she passed the jackrabbits and coasted to victory. 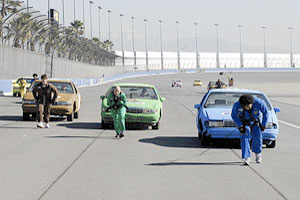 Tara, in green, passing Mike and gaining on Sione

I think of this challenge often. It seems to epitomize so much of what I've learned about life — and personal finance. As Tara pulls her car, she doesn't worry about what the people around her are doing. She sticks to her game plan, moving slowly but surely toward the finish. Just as in the fable of the tortoise and the hare, slow and steady really can win the race.

(And, as a final note, I'll point out that you're only racing with yourself — not anyone else.)

This is the eighth of a fourteen-part series that explores my financial philosophy. These are the core tenets of Get Rich Slowly. Other parts include:

The relationship between time, money, and happiness

Tech Lust: How to Cope with Gadget Envy

Holiday Saving Tips: How to Grow Your Christmas Nest Egg

How to compute your REAL hourly wage

Yes! Sign up and get your free gift
56 Comments
Oldest
Newest Most Voted
Inline Feedbacks
View all comments