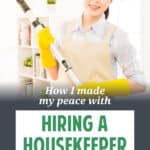 J.D. and I have been employing an independent housekeeper for about 10 years. The one who's been working for us for almost five years, Michele, is fantastic and we feel lucky to have her. (We found her through Craigslist). Housecleaning is her full-time job.

It took us some time to get over our self-imposed barrier of hiring some help with the house chores. I'm not lazy, and it struck me as a weak, self-indulgent thing to do. But, as J.D. freely admits, he's a slob. We'd fight over the mess in the house, and time and time again would try to institute a “system” to keep it clean, only to fail once more and descend into arguments. With both of us working full-time, we wanted to spend our time at home in other ways than cleaning.

Still, I felt guilty for paying someone else to do work I didn't want to do myself. I admit it: It feels weird to pay someone to clean your toilets! And I felt guilty for even being able to afford considering “outsourcing” the housework. After all, anyone can do housework, right?

Over time, however, I've realized that my guilt is misplaced. (Although it still lingers a bit.) Why would I feel any guiltier paying someone for cleaning my house than cooking my food at a restaurant, or growing my food at a farmer's market, or knitting a hat I buy at a cute store? I can cook; I can grow food; I can knit. But often I choose to pay someone else to do these tasks rather than do them myself. Why does the housekeeper, then, represent such obscene luxury in our debates on the complexities of social economics?

J.D.'s note: Some of Kris' thoughts here remind me of my own meditations on the guilt of wealth.

Primarily, I believe it's because we see our housekeeper face-to-face. We invite her into our homes and our lives. We see the struggles in her life (she's a divorced mom of two teenagers) in a way that is invisible for the many other jobs we outsource. The agricultural worker doesn't deliver pears to my door, nor the factory worker bring inexpensive mass-produced products to personally stock the shelves in my pantry. I don't directly pay the garbage-collector, the office custodian, or the guy who sweeps out the theater after J.D. spills all his candy on the floor. For these things, there's an insulating layer of “a company” between the producer of the goods and the consumer. With housekeeping, no such dividing layer exists.

Professional housecleaning, like agricultural harvesting, child-care, and many service-industry jobs, is a job that is frequently performed by people without much higher education or unique skills. (Or they are choosing not to use that education or skills, or perhaps there is no market for their particular talents.) These jobs are typically low-paying, but that doesn't mean the people who perform these jobs are unworthy. I'm all for a living wage, but the more specialized and rare your skills, the higher salary you can command if there is a market for those skills. It's basic supply and demand. And just because a job doesn't pay well does not mean that job is demeaning.

I won't pretend my housekeeper has such a “passion for cleaning houses” that it led her to this profession, but she's a survivor, and has chosen housecleaning for many personal reasons, not the least of which are the flexibility in her schedule, the freedom to choose the clients she serves, and the chance to be her own boss. The trade-offs include a physically-demanding job, inconsistent income, and a relatively low salary (due to not working 40 hours a week, although at $22, her hourly wage is decent).

I think another part of the “housekeeper dilemma” is the historical disregard for the value of work that has been “women's work”, and the expectation that if there is a woman is in the house, she shouldn't need to pay another person (usually another woman) to do the tasks she is supposed to be doing herself. If someone is cleaning a house that's not their own, they must feel degraded, right? But any work can be found degrading, sustaining, fulfilling or mind-numbing. I doubt that those of you who clean your own toilets feel degraded by the process.

What matters is not so much the type of work but the working conditions and the self-respect possible for the worker. Michele knows her work is valued in our home. The days I come home after Michele has been at my house are like a treat to me! And she knows it — because I tell her. I'd gladly give up other expenses before I cut Michele out of my budget. For her part, I'm pretty sure she values having us a steady clients who always have the check ready on the table and share the garden produce in the summer months.

The popular opinion is that anyone can do housework (so you shouldn't outsource this labor), but does that mean that everyone has to? As GRS readers know, we grow and preserve much of our own food. That's something I truly enjoy. Housework? Not so much. Someone else might think canning applesauce in a hot kitchen on a 90-degree day sounds like pure drudgery; they'll outsource the task and get their jar of applesauce at the store. No one gives that a second thought, but there are a lot of outsourced laborers between the apple tree and that jar. Me? I'll outsource cleaning the kitchen instead.

In my mind, the bottom line is that everyone outsources. Unless you grow, harvest, and process your own food, make your own clothes from fibers you've produced and spun, build your own house, create your own power sources, and are completely independent from the long chain of people in the manufacturing economy, you're paying other people to do that which you do not want to do, don't want to make time to do, or lack the skills to do. In the modern word, specialization is the norm.

So, do what work works for you — I'll be in the garden.

Bonus! After Kris wrote this article, I made a point of talking with our housekeeper when she came by on Wednesday. Here's what she had to say about her work.J.D.: What sorts of people hire a housekeeper?

Michele: All sorts of people. Students, new mothers, women with careers. It's usually women, although lately a lot of men have been responding to my Craigslist ad. That kind of makes me a little nervous sometimes, but so far it's been fine. I think they're just trying to give their wives a break.J.D.: Should people feel guilty about hiring a housekeeper?

Michele: No way! Why should they? I had a housekeeper for a while. I had so much going on that I didn't have the time to clean like I wanted, and I could afford it then. I'd do it again if I could. But I guess some people do feel guilty — especially women. There's this stigma: People think women should be able to do it all — raise the kids, go to work, clean the house — but they can't. A housekeeper helps relieve some of that stress. So I guess women feel guilty because they feel like they're not doing everything they should. But bachelors that hire me? They don't have one ounce of guilt! I think once people get past the guilt, they love having a housekeeper. It's just a matter of where your priorities are and what you can afford.J.D.: How do you feel about cleaning houses? Is this what you see yourself doing the rest of your life?

Michele: Well, my passion is working with animals. I'd love to work in an animal shelter. And I'm a trained doula, but I just haven't done anything with that. So, I clean. But that's what I do anyhow. It's just what I do. It's in my blood. My dad owned a janitorial service. My sister cleans houses. My mother cleans houses. I clean houses. I like it. I like being my own boss. I like the variety, going from house to house, and I like the flexibility. Last time, you let me adjust my schedule so I could take my son to get a tattoo, for example. I couldn't do that if I wasn't my own boss. And it's pretty good money — if I can fill up my days, which is harder with the economy like it is. But I enjoy it.

There are 176 reader responses to "How I made my peace with hiring a housekeeper".