Earlier today, I reviewed the new book from The Motley Fool, Million Dollar Portfolio. I had the pleasure to interview author David Gardner at the end of December. This post contains excerpts from that interview. The complete interview will be included as part of the hypothetical future Get Rich Slowly podcast.

J.D.
Earlier this year, you met with Stephen Popick, a government economist who writes for Get Rich Slowly. During the first part of your interview, you talked about teaching children about personal finance and investing. You talked about a long-term version of the stock-market game.

I like the idea of a stock-market game, and I've had some people ask me about similar things. They want to know if there are similar tools or methods for adults who want to learn about investing without risking their capital just yet.

David
First of all, I enjoyed meeting Stephen a lot. He's a very nice guy. I think at the time, he and I were talking about CAPS and about what we're doing on our site with that, and that's what's coming to mind as you ask me the question.

I think the purpose of a site like CAPS is to enable people to score themselves. You know, to actually step up and instead of at a cocktail party saying “I think CROX is going down!”, if you think CROX is going down, type it in. Put it right into this transparent open platform where you thought CROX at this date at this price was going to lose to the stock market. And that's what CAPS does.

The Motley Fool in general and Million Dollar Portfolio specifically [are] about picking stocks. [The book] is written for the individual investor who wants to own individual stocks. Yet early in the book you write that, “If you're a beginning stock investor, your portfolio should be built upon a sound asset allocation plan and a set of carefully chosen mutual funds.”

David
That's an excellent question. In fact, it's really the question that each of us has to ask ourselves. Part of what we're trying to do with the book is to show people that there are multiple ways to invest successfully.

The truth is there are innumerable ways to invest. It more comes down to figuring out what color your parachute is. That's really largely based on three factors:

J.D.
Say you're an average investor. You have a 401(k) through work and then a Roth IRA on the side that you manage yourself. I want to know how you go about investing in individual stocks in a way that makes sense.

I guess what I mean is, I think the book recommends 12 stocks and it also recommends 30 stocks for a diversified portfolio, but if you only have $5,000 a year for your Roth IRA, how do you approach this, especially so that transaction fees don't chew away your capital?

David
If I had $5,000, the first thing I would do is I would probably make five $1,000 investments. With one of those thousands, I would definitely buy an index fund. I would start right there.

We love the index fund. As much time as we spend talking about stocks, we tried to champion an index fund for 15+ years. In fact, we had Jack Bogle in our office just ten days ago talking to our employees. We've become good friends with Jack over the years. We have a huge degree of affinity and for the index fund.

Where we part with Jack is that we think of that as the benchmark. That's the “you didn't have to spend any time, you didn't have to apply any brainpower, you just basically went autopilot”. The funny irony of that — as you well know — is that autopilot beats most of the other pilots out there most years.

We think, “Hey! I can beat the autopilot.” […] We feel as if — and I think our public record proves this — that we can beat the market. It's not about never having any losers, and it's certainly not about always beating the market every year. It's about not paying anybody a management fee, and over time doing better than all those who are.

But you do have to put some time into this. If you're going to try to beat Jack Bogle, you're not going to do it by hiring somebody else to do it for you. You're going to probably have to roll up your sleeves and learn over time. You're going to have to bloody your nose a bunch of times, you're always going to be humiliated by years like 2008, no matter who you are. You have to be willing to be that way.

A little bit of a blustery answer there. Yeah, so that was my whole key into the $5,000. I would take the other $4,000 and buy four different stocks.

J.D.
But the one thing I worry about is that each time you purchase a stock, you're paying $20 or whatever it is, so you're sacrificing something right away.

David
Actually, you can pay no dollars for it, pretty much. Or let's just say five bucks.

J.D.
I guess Sharebuilder can do that.

David
Yeah, and have you looked at Zecco at all?

J.D.
I haven't actually used it, but I've looked at it a little bit.

David
Well, there are some funny crazy models that can reduce your costs to almost zero. You can definitely pay less than ten bucks. In other words, if you were looking at a $1,000 investment, you're paying less than 1% for your transaction in.

J.D.
So as long as you're holding it and not churning your stocks, you're keeping your costs low.

David
Yeah, that is certainly true, and that's something we've advocated.

So, if you're trying to answer that $5,000 question, I would take four stocks…and I would make sure they were from four different industries. I would pick companies that I'm personally motivated to follow, that I'm energized to learn more about, not something somebody told me about that's somebody else's industry I have no interest in. 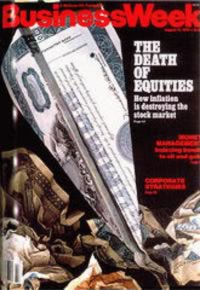 I've been reading Roger Lowenstein's biography of Warren Buffett. As I'm reading that, I'm just shocked at how over and over again the market will go through down periods like the early seventies or the late eighties. Again and again people proclaim “the death of equities” and how the stock market is no longer the place to be.

But Warren Buffett is waiting there patiently. As people are saying that, he's being greedy when others are fearful.

David
I don't think the stock market is so much a thing to ultimately believe in or not. I just think of it as an opportunity to become a part owner of companies.

I think capitalism works. That's one of my basic beliefs. And as long as capitalism is being practiced effectively by a culture (or by the world), there will always be good stocks. Therefor it's always worth paying attention. But you don't actually have to think in stock market terms.

“The stock market” as a label is too broad. It's too broad a brush to paint. I don't really think about “the stock market”. I think about my individual stocks. Some of them do better than the market; some of them do worse. In the end what you're doing is becoming a part owner of things. And as long as you believe in ownership and capitalism in that sense, why wouldn't you have a life-long love affair with the stock market? Or at least realize that it's a really interesting place to learn?

Even if you didn't invest, if you're in business, or really in our culture and you're trying to make good decisions about either the company you work for or if you're trying to guess trends or anything like that, you absolutely want to become a student of the game of business.

That's really all the stock market does. It scores and tallies what's happening in the game of business over time.

I don't quite understand somebody if they were to say to me, “I don't even look at the stock market” or “You're either in it or you're not”. My opinion doesn't change. The one way that I can say I'm Buffett-like is that my opinion of the purpose of it and the underlying system doesn't change. I don't jump in and out of the market over time.

J.D.
Right. So long term, it's a “weighing machine“, as Buffett would say.

David
I didn't have that in mind as I was speaking, but I'm glad you came up with it. You and I know it starts with “in the short term, it's a voting machine”. The purpose of that line is simply to remind people to try to look past the present. That's contrary. That's hard to do. Most people don't do that by nature. Some people are probably incapable of doing it. The reason he reminds us of that is you're going to make better financial decisions if you can gain that ability.

How to donate your body to Science

Becoming proactive: The number-one secret to wealth, freedom, and happiness

How to check your Social Security benefits online