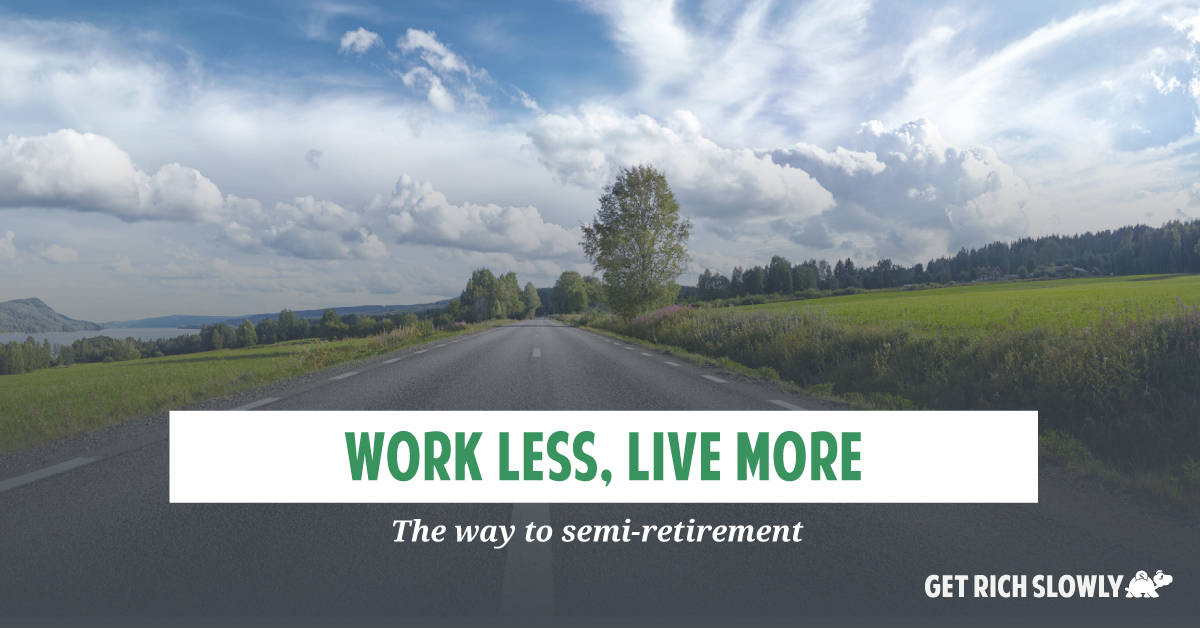 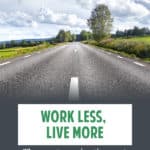 In 1988's Cashing In on the American Dream, Paul Terhorst wrote about retiring at age 35. Although his aim was to show readers the path to early retirement, he also sang the praises of temporary retirement — retiring young with the idea that you might go back to work later in life.

As I mentioned a few days ago in my article on the five types of retirement there's another way to mix work with financial independence. In Work Less, Live More, Bob Clyatt makes the case for semi-retirement.

The Way to Semi-Retirement

In many ways, Work Less, Live More (published in 2005) reads like an updated (and more detailed) Cashing In on the American Dream. Even the author bios sound similar. Here's how Clyatt describes his background:

In 2001, after 20 years of sustained high-pressure work, the last seven spent battling in the Internet wars, my wife Wonda and I chucked it in, mothballed our suits, rented a small summer house in Italy, and began our new lives as early retirees.

But early retirement was no paradise for Clyatt and his wife. They were stressed, and their friends were stressed too. Did he really have enough money saved? What about the sluggish stock market? He began to question his assumptions: Had he made a terrible mistake?

Ultimately, he realized the worst-case scenario wasn't so bad. He probably did have enough to stashed away to sustain his early retirement, but even if he didn't the downside was that he might have to do a little work. This realization allowed him to embrace the idea of semi-retirement.

“Doing some amount of engaging work offers a comfortable transition between full work mode and full retirement mode,” Clyatt writes. “With a modest income from part-time work, early semi-retirees may not have to face the dramatic downshifting in spending and lifestyle that so often confronts those who live only on savings or pensions.”

Here's an extended explanation from the book:

Semi-retirement — reclaiming a proper balance between life and work by leaving a full-time job — offers a way out of the madness of overwork. By reducing spending and switching to a pared-back but more satisfying lifestyle, less money goes out the door.

Tapping into accumulated savings in a sensible way provides a steady annual income. Any shortfall can be filled with a modest amount of work, done in an entirely new state of mind: With less need to work for the largest paycheck possible, you can find low-stress work that you truly enjoy, on a schedule that gives you time to breathe.

Clyatt divides Work Less, Live More into eight chapters, each of which explores one of his rules for semi-retirement:

Let's take a closer look at the semi-retirement approach to creating work-life balance.

Figure Out Why You Want to Do This

Pursuing semi-retirement (and early retirement) requires commitment. It takes time and energy. Before you begin, Clyatt says, you should ask yourself why you want to do this. (Do you want to do this? If you love your career and want to keep working, then do so. Don't give up a good thing!)

If semi-retirement feels like a good fit for you, you should do two things:

Using the “big rocks” metaphor, Clyatt says the key to a successful semi-retirement is prioritizing the important stuff while allowing the daily distractions to sift to the bottom of your to-do list. Here's a video that demonstrates this idea:

This concept is true for everybody, whether you want to pursue early retirement or not. To better manage your time, to increase your well-being, you ought to focus on your big rocks first.

If you decide that semi-retirement is right for you, be sure your partner is on board. You don't want to be working at cross purposes. Also, be careful to practice moderation. Too many people become obsessed with saving too much too quickly. This can lead to disillusionment and resentment. Instead, practice balance. Remember to enjoy today even as you save for tomorrow.

Live Below Your Means

“If you are planning to semi-retire, you'll need to spend less than you earn,” Clyatt writes. You'll need to live below your means.

Anyone who is under 65 and on the path of semi-retirement needs to think of assets as a resource to be carefully planted and harvested. You may long for some material luxury such as a new car or a second home, and you may even have enough cash on hand to pay for it. But because you are building a safe spending and budgeting plan for the long term, you need to keep that money invested and working for you, instead.

According to Clyatt, “Living Below Your Means is spending less than you make, less than you could, less than your peers. It's a powerful tool.” In Get Rich Slowly terms, he's talking about the power of personal profit — the gap between your earning and spending. The greater your profit margin, the faster you can achieve your goals.

The advice in Work Less, Live More is standard stuff, but that's not a bad thing. You hear these recommendations all the time because they work: manage your career to maximize income, cut costs wherever possible (especially on the big stuff). “Don't even try to keep up with the Joneses,” writes Clyatt. And learn to say “no” — to your friends, to your family, and especially to yourself.

Put Your Investing on Autopilot

What do you do with your personal profit? Build an enormous retirement stash! Clyatt advocates what he calls Rational Investing. Here are its basic tenets:

“A semi-retiree, particularly a younger one, should not try to simply achieve the highest rate of return if that means an unacceptable level of volatility or risk,” Clyatt writes. “Choose a mix of assets to maintain an acceptable level of return at the lowest risk, which generally means holding lower levels of equity [stock] than some other long-term investing models advocate.”

Although Clyatt likes passive investing, he does not recommend putting your entire stash into a single S&P 500 index fund. He prefers a slightly more complicated (and nuanced) approach.

“Withdrawing money safely from your portfolio each year is the engine that makes semi-retirement viable,” Clyatt writes. There are two steps to starting your economic engine:

There's a wide range of rigorous statistical research to support the idea that it's safe to withdraw about 4% from your portfolio each year to use as living expenses. But this number is an estimate. It's not a rule and it's not a guarantee. If you knew how long you were going to live and what your investment returns would be each year, it'd be easy to come up with an exact number. But you can't know these things, so all you can do is estimate.

Studies show that withdrawing about 4% each year will allow you to keep the inflation-adjusted value of your principal intact. Of course, if your goal is to “die broke” — which some people aim to do — your spend rate can be higher. And if you're an older semi-retiree, you can withdraw more than 4% too.

Clyatt says that in the olden days, people set their withdrawal rate on their first day of retirement — then only adjusted it for inflation in the future. So, if you had $1,000,000 saved when you retired, you'd take $40,000 for living expenses in the first year, and adjust that number annually for inflation thereafter.

Unfortunately, this method runs a high risk of depleting a portfolio if the economy turns sour. Instead, Clyatt recommends the following:

How do you get your 4% living expenses out of your investment portfolio? Simple. Instead of having distributions reinvested — as most of us do — request that these funds be channeled into a money market account. Pull out more cash when you rebalance your portfolio every year. And if you need more money, then sell some of your investments.

Filling in the Blanks

For years, Work Less, Live More has been my go-to book for info about early retirement. I give away copies several times a year. I recommend it when replying to email. I refer to it myself when I have questions.

I like this book because it strikes a balance between the high-level Big Picture stuff (like you'd find in Cashing In on the American Dream) and the low-level nitty-gritty numbers crunching (such as the material in Early Retirement Extreme). Both of those books are great, and I recommend them too, but Work Less, Live More seems to offer the best all-around approach to early retirement planning.

A lesson in economic violence

The pros and cons of gift cards

The flywheel of wealth (and the importance of patience)

As featured in:
68 shares