Our friends have a profound effect on our personal finance habits. Some friends can lead us to spending and to debt. Others offer insight into the virtues of thrift. For me, my friend Sparky has been the latter. Through his example, I learned that frugality can help me achieve my goals.

“Develop a plan that is so amazing, so glowing, that you are willing to walk blurry-eyed to work every day to make the money necessary to reach the light.” — Sparky's advice to GRS readers in 2006

After my friend Sparky graduated from college, he drifted. He couldn't hold a steady job, and he didn't stay in one place for long. He traveled to Mexico. He moved to New England. He lived in various cities in Oregon and Washington.

“I don't know how you can do it,” he told me once when he saw our new house. “You have a home and a wife and the same job you had five years ago. I'd hate that.” He lived as a First World nomad.

I visited Sparky once in early 1996. I stayed overnight at his apartment in Eugene while I played in a nearby chess tournament. I was amazed by his Spartan lifestyle. He had no television. He had few books and little furniture. Most of what he owned had been purchased second-hand. His refrigerator was almost completely empty. (In my memory, it contained only two items: a carton of milk and a bottle of ketchup.) Sparky's only indulgence seemed to be a collection of bootleg U2 CDs.

“How can you live like this?” I asked him. “Where's all of your Stuff?”

Sparky smiled at me. “I don't need a lot of Stuff, J.D. The Stuff is not important. To be honest, I don't know why you have so much Stuff. How do you live like that?”

I didn't know what he meant at the time. To me, life was all about the Stuff. I had hundreds of CDs and thousands of books. I had a TV, a stereo, a house, and a car. I wanted more. Sparky had none of these, but he had something I did not. Sparky had freedom. His frugal lifestyle allowed him to save and invest. I marveled at how he squirreled away his money. I didn't understand how he managed it. I made at least twice what he did, but he had money in the bank and I had none. Instead, I had $20,000 in debt and was taking on more every day.

During the summer of 1997, Sparky and I went for a hike. As we walked, we talked. He told me about his plans and his goals. He was living in a small town in northern Washington, working two full-time jobs, a part-time job, and getting free rent in exchange for housesitting with an elderly homeowner. “I've only had five or six days off in the past eight months,” he said.

“That seems crazy,” I said. “Why are you working so hard?”

“I want to travel around the world,” he said. “You know that I don't have a lot of Stuff. There's a reason for that. Material possessions tie a person down to one place. I can't travel if I have a house and a car and all of that other Stuff.”

He told me about the trip he had planned. He had a one-way ticket to Thailand. From there, he hoped to travel to India and then Israel, but he didn't have any sort of agenda. “I'm just going to go,” he said. “I'm going to travel as long as my money holds out.” 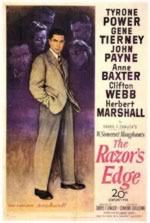 “You sound like Larry Darrell,” I said, referring to The Razor's Edge, W. Somerset Maugham's 1944 book about a young American disenchanted with the way of the West. “Larry lives like a pauper, but is able to loaf around Europe and India while searching for enlightenment. It's a great book. You should read it.”

“Maybe I will,” he said. And then he added, “Do you want to come with me?” Of course I did, but I couldn't. I was in debt. I had no savings. I couldn't afford to drop out of Real Life for five months. How would I pay for all of my Stuff?

Sparky went on his trip. He backpacked across the world alone, and he loved it. He sent me postcards from stops along the way: from Thailand and India, from Nepal and Israel and Jordan and Egypt. He was gone for five months. Because he was not burdened by Stuff, he returned to a financial position similar to the one he had left. He didn't have a mortgage or other debt. His savings and investments were still intact. He had lived for five months without an income, it's true, but he'd spent exactly what he budgeted, and he'd had the experience of a lifetime.

When Sparky got back, he settled down to a more normal way of life. He got a real job. He even bought a house. Still he continued to pinch his pennies, spending only on the things that really mattered to him. Eventually, I began to see the connection between his lifestyle and his quiet wealth.

When I started Get Rich Slowly, Sparky was enthusiastic. He talked to me about my newfound appreciation for personal finance. He shared his favorite books, his favorite tips, and his favorite mutual funds. A few of our conversations even became fodder for GRS stories:

Whereas I had once viewed Sparky's ascetic lifestyle as a little strange, I began to understand it as a means to an end. Perhaps I couldn't be as frugal as he was, but I could still learn from some of his lessons. We had some great conversations about money and about goals and about the future. I looked forward to learning more from him.

That's not going to happen.

Sparky died unexpectedly last week. We had been close friends for 25 years, and he was an important part of my life. He challenged me. He believed in me more than I believe in myself. I cannot say that Sparky was without fault. Like anyone, he had his quirks. But on the whole, he was a positive influence in my life, and when it came to money, he was a shining example of how to live right. I'll never have the chance to learn from him again.

Please, my friends, always remember that true wealth has nothing to do with money. True wealth is built from friends and family, from experiences and relationships — it is derived from a life filled with meaning. Without these things, money means nothing. Do me a favor this week, and spend some time with the people you love.

How to live a rich life — on a budget

How I built my own house — without a mortgage

The shocking truth about medical bills that can save you thousands