Finding balance between time and money

Lately my personal focus has been on finding balance in my life. I'm trying to discover the proper place for money — and for time. Over the past few years, I've allowed money to become too important. I've worked too much, and that has hurt other aspects of my life. I don't have time for anything else.

As part of this process, I've been reading the new edition of Your Money or Your Life, the classic book that influenced so many of us here at Get Rich Slowly. One of the authors' main points is that time really is money. Or, approaching it from the other direction, money is time. They write:

Our life energy is more real in our actual experience than money. You could even say money equals life energy. So, while money has no intrinsic reality, our life energy does — at least to us. It's tangible, and it's finite. Life energy is all we have. It is precious because it is limited and irretrievable and because our choices about how we use it express the meaning and purpose of our time here on Earth.

I know this sounds a little New Age-y, but it's a profound concept. As it did for many GRS readers, this notion changed my life. But in some ways, it's an abstraction. I can talk about trading my life energy for money, but I don't know what this actually means in practice. I met somebody the other night who understands all too well.

Time is Greater Than Money

When my friend Sparky died in January, a group of his friends met after the memorial service to share our memories of him and to reconnect. Most of us hadn't seen each other since high school graduation, over 20 years ago. That first meeting was fruitful, and we've continued to meet once a month ever since.

We got together again last Friday, and this time Jonathan made an appearance. Jonathan was a good friend in junior high and high school, but I haven't seen him since we graduated. He's one of those people who just seemed to fall off the face of the earth. We spent some time Friday catching up.

I told him my story, about my struggles with debt and my current career as a professional blogger. “I don't even know what that is,” Jonathan laughed. I explained that my goal was to turn my former problems with debt into something good, and to help others avoid similar mistakes (or to recover from them) in the future.

“What about you?” I asked. “What have you done with your life?”

Jonathan took a deep breath. “Well, after graduation I got a good job,” he said. “I didn't go to college, but I learned a trade. I'm an electrician. I got married right after high school to a wonderful woman. We had a daughter and had another one on the way. We were married for almost eight years — but then they both died during childbirth.”

“Oh my god, Jonathan,” I said. My heart ached for him.

“Yeah,” he said. “We were deeply in love, and when I lost her, I was no good for a long time. I've managed to turn things around in the last ten years, but for a while it was a real struggle.”

He paused for a moment, and then added, “Earlier, you were talking about money. Here's the thing about money: I'm not willing to sell my life anymore. When I was young, I was willing to work 60 hours a week. Or more. I was making gobs of money. We had a house and all the stuff that went along with it. I wanted more. I had plans and dreams.”

“But that ended in an instant. All of that vanished when my wife died. It just didn't matter anymore. I've often thought that if there were some way I could buy back time with her, I would. I'd go deep into debt. I think anybody would. And that's what people don't understand. I could work 60 hours a week now, too, but I refuse to do it. I'm offered promotions, but I turn them down. These aren't the things that are important to me. Time is important. Family is important. Life is important.”

“That's a fantastic point,” I said, “but it can be so difficult to remember. I write a lot about working hard to earn money now so that you can essentially buy time in the future.”

“Yeah, J.D., but what about today? When you reach the end of your life, you're not going to say, ‘I wish I had more money.' You're going to wish you had more time, and that you'd spent more time with your loved ones while you could. If you had a magical credit card and you could buy back the days of your life, how far in debt would you go and not even care?“

“That's an interesting question,” I said. “I guess ultimately we each need to find a balance between time and money. That's what's tough.”

Jonathan has lived through the sort of thing that many of us only have nightmares about. He now has an innate understanding of the “life energy” concept described in Your Money or Your Life. His story affected me deeply. In fact, his words changed my behavior later that very night.

As our group moved from restaurant to bowling alley to karaoke bar, I was tempted to go home. I needed to write. I needed to work. I didn't have anything ready for Get Rich Slowly. I was about ready to say my good-nights then I thought of what Jonathan had said earlier about the importance of time over money. When I was on my deathbed, which memory would I treasure? That I had gone home to write about money? Or that I had watched Jonathan belt out Queen's “Crazy Little Thing Called Love”? That question was easy to answer.

I stayed out late, watching my friends laugh and sing. 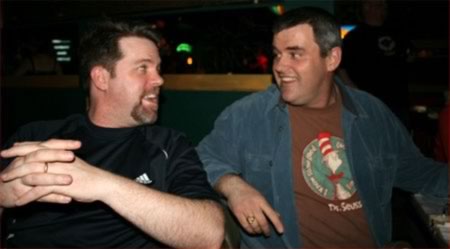 How to create your own target-date mutual fund

How much do we owe others? (and when should we walk away?)

Five lessons I learned while making a documentary film about FIRE

Yes! Sign up and get your free gift
102 Comments
Oldest
Newest Most Voted
Inline Feedbacks
View all comments

As featured in:
393 shares
wpDiscuz