Every Tuesday and Thursday morning for the past four weeks, I've awakened early and driven to the gym for a one-hour workout with a personal trainer. This is awesome but it also sucks.

Why does it suck? Because:

Plus, who likes getting up at five o'clock? Not me! I can handle 6:30 no problem (and left to my own devices, that's when I'll naturally rise) but crawling out of bed ninety minutes earlier destroys me.

At the same time, this change has been awesome. Eight years ago, when I was at the heaviest weight of my life, I forced myself to get up early and go to the local Crossfit gym. After two years, I'd left peak fatness behind and achieved peak fitness. I was in the best shape of my life! Now I have a long way to before I get back to that point, but the key is that I've started.

Aside from improving my physical fitness (I've noticed positive changes already), this move has improved my mental fitness. Honestly, that's actually what prompted me to get back to the gym. After admitting to myself that my depression was messing up my life, I resolved to make changes.

At first, I wanted some magic instant cure for the depression. There isn't one. As with most things in life, there are no shortcuts to solving mental illness. (Perhaps a pill might be considered a shortcut, but pills come with side effects.) To get better, I need to do the things I know help me fight the disease.

Chief among these cures is fitness. When I'm active and fit, my mental state is much better than when I'm fat and sedentary.

I'm taking other steps too, of course. I've been spending more time with friends. And I've come to the realization that my sleep has been a huge culprit these past few months. I've been getting shitty sleep due to my weight and alcohol consumption. So, I'm (once again) working to reduce the alcohol, and I did an in-home sleep study that revealed my sleep apnea has returned. I'm waiting for a mouth-guard to be manufactured, which should improve my sleep quality.

Notice that none of these things are shortcuts. Drinking less, eating better, exercising more, and addressing my sleep issues all take time, money, and effort. I can't beat the depression by simply wishing it away. Thinking about getting better will solve nothing. Only action matters.

This morning while my trainer was leading me through proper form on the push press, he talked to me about his current financial situation. He just lost a few hours at another gym, and it's putting the pinch on his budget. (Cody also happens to be one of my best friends, which is why he was sharing this info.)

“So, I applied for a new job,” Cody said. “It's something completely different. It's an online sales position. I met a gal the other day who's doing the same thing and she made $9000 last month while working only twenty hours per week!”

“That's great,” I said. “It'd be awesome if you got the position.” Then the conversation turned to the motorcycle trip we're taking next weekend. Which route should we take from Portland to central Oregon? Where should we stop? What should we do?

Later, though, I got to thinking. While it is awesome that Cody has applied for this new job and I hope he gets it, I worry that he's exhibiting what I call “magical thinking”. Instead of pursuing mundane work in a field he knows (and is good at!), he's looking for a shortcut. That shortcut is a high-paying job in an area he knows nothing about.

This is the sort of thing I used to do all of the time. Back when I was deep in debt, I was always looking for shortcuts. Instead of doing what I knew needed to be done, I was constantly searching for ways to get rich quickly.

Just the other day, I found an example of the sort of shortcut I used to be drawn to. In the mid-1990s, I read an ad in a magazine about how you could make big bucks just by reading books. Holy cats! I liked reading books. I sent away for info. In return, I got this pamphlet that promised publishers would pay me $100 (or more) for every book I read: 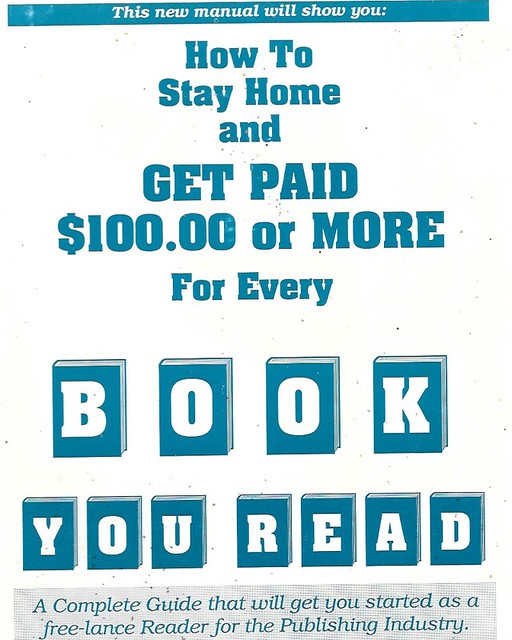 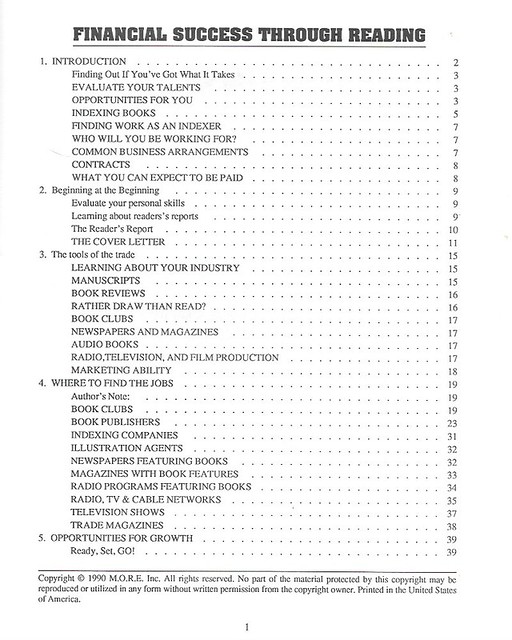 I can't recall if I tried to follow the pamphlet's advice or not. I suspect “not”. It took effort. I didn't want to solve my problem by exerting effort. I wanted it to magically go away. I wanted a shortcut to success, a shortcut to debt elimination.

As regular readers know, I eventually surrendered to the fact that there aren't any shortcuts to getting out of debt. I did what I needed to do to cut my spending and increase my income, then spent 37 months repaying my $35,000 in consumer debt.

There Are No Shortcuts

Last Thursday, I joined Douglas Tsoi (who runs Portland Underground Grad School) to present a three-hour workshop we called Financial Freedom 101. (If you'd like, you can view our slides for the workshop here. I'm not sure they'll make sense without context, though.)

“Money is a game,” Douglas said at the start of our third hour. “And there are rules to the game. Some folks try to make the rules more complicated than they have to be. Others try to find ways around the rules. Still others believe the rules are a mystery, that they're hidden and have to be uncovered. The reality is the rules to the game of money are simple. They're not easy but they're simple. And you already know them.” 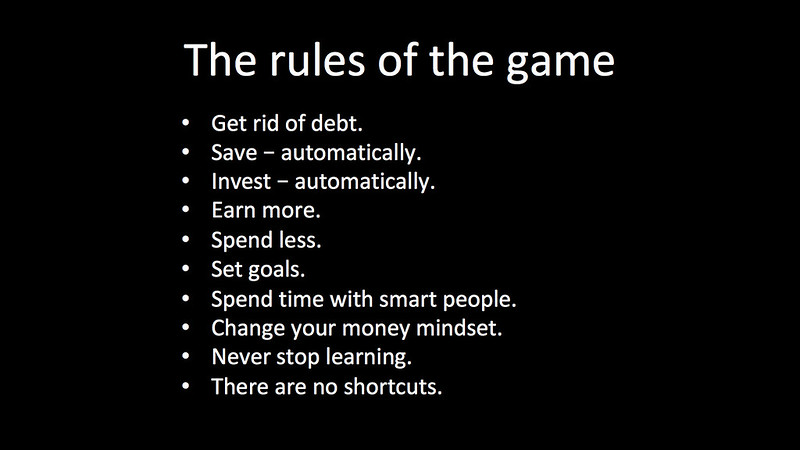 Douglas and I walked the audience through “the rules of the game”. The final rule, which we added to the slide moments before we started the presentation, was this: There are no shortcuts.

If I want to beat my depression, I have to get fit. I have to eat right. I have to drink less. I have to spend time with friends. And so on.

If you want to achieve your financial goals, you have to spend less than you earn — you need a positive saving rate. That's how the math works.

As a life-long shortcut seeker, I completely understand the appeal of magical thinking. It took me months to realize that's the approach I was taking to defeating my depression. I was doing nothing and hoping that things would simply turn around on their own. But you know what? Things never turn around on their own. (If they do, the improvement is coincidental and generally short-lived.)

There are no shortcuts.

If you want to achieve anything in life — whether it's getting out of debt, writing a book, or shedding your beer belly — you have to put in the work necessary to make it happen. That's not what people like me want to hear but it's the truth. The good news is that, as with the game of money, the answers are usually simple — even if they're not easy.

Footnote: While finishing this article, I realized that many of the spam comments I deal with are targeted at folks looking for shortcuts. Here's a typical example:

“Click this link and watch all of your troubles wash away.” That's the very definition of magical thinking.

There are 24 reader responses to "There are no shortcuts".